Angela Deth comes from a strict religious community of Arizona. She felt suffocated as a child and became a rebellious teen as she grew up. Once, she got into a fight while drunk and was knocked out, but was saved by the Desert Rangers who locked her in their prison for a while. Realizing this after regaining consciousness, she felt thankful and thus decided to join them.

While training to become a ranger, she was teamed up with Snake Vargas, Thrasher and Hell Razor. She had a brash attitude and used to constantly crack jokes, something which Vargas found irritating. While they were an odd bunch, Sergeant Dalton recognized that the four worked well as a team and forced them to remain in a single squad.

While on a routine patrol through the wastes in 2087, they rescued Ace from Quartz and were asked by him to come to Las Vegas. There, they met his boss Faran Brygo and were informed about robots attacking humans and settlements in the wastes for an inexplicable reason.

The Rangers discovered that they were being produced by the Base Cochise AI, which thought that humans were a threat to its existence. In order to end the robot menace, they destroyed the base. She also acquired the rank of "Captain" that day and continued to remain one for 15 years. Angela also later developed a romantic relationship with Ace.

A mysterious broadcast threatening the Rangers caused Vargas in 2102 to assign Ace to attach repeater units to three remote radio towers in Arizona. She delivered them to Ace at Rail Nomads Camp and requested him to let her come with him after he told her that he suspected some one was following him, but he declined.

Ace was later murdered by a synth, causing Angela much grief and regret. She thus decided to seek revenge and as a result, was barred from going out on patrol by General Vargas. She however ignored his order and decided to secretly ask Team Echo, who had been assigned to find the repeaters, to let her join them on the mission.

Angela Deth is one the 4 starting party members when you begin a game of Wasteland. She comes equipped with a VP91Z 9mm pistol, 8 9mm clips, Rope, Canteen, Crowbar, Knife, Hand Mirror, and Match. 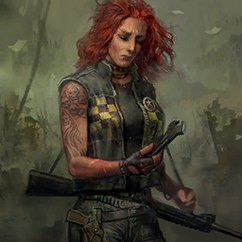 Angela Deth is a recruitable character, available from the Ranger Citadel from the get-go. Once player talks to Angela Deth, she will offer to join your team in order to avenge Ace's death. She will be ordered to leave near the beginning of the Canyon of Titan, permanently removing her from your party.

It is important to find a suitable replacement for her weaponsmithing and brute force skills before she leaves. This also means it's wise for the player to replace her as soon as an extra companion is found while 7-men party size is filled, as all XP that went into Angela is lost a quarter way into the game.

Angela will interact with numerous characters in Arizona and react to the player uncovering news about Ace and his death.

She has excellent assault rifle skills and weaponsmithing, plus some outdoorsmen skills, being very useful in any combat engagement and preparing for them as well.

Despite being available as soon as the player starts the game, she is level 7, meaning despite her low strength and luck, she can work as an effective tanker until suitable replacement like Takayuki is found.

Retrieved from "https://wasteland.fandom.com/wiki/Angela_Deth?oldid=21951"
Community content is available under CC-BY-SA unless otherwise noted.