Brother Neil Thomas was a member of God's Militia, fighting for what he perceived as a righteous and just cause to better the world around him. However, that idealism started to erode and became disillusioned with the group as it's actions became in his eyes more and more unjust and morally wrong. This came to the point of him blows with Retribution Jones and leaving the order.

He believed his cause was lost until he heard about a new outfit on the radio arriving to bring law and order to the wasteland, one that was actually trying to do good. Without delay, the former member of the God's Militia headed over to join the Desert Rangers.

How To Get Him Edit

Brother Neil Thomas will arrive at Santa Fe Springs. After the 2nd radio station has been set up and posted as well as preventing the execution by God's Militia at Santa Monica.

He will leave if you attack people without provocation. 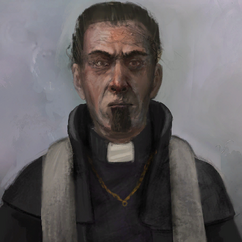 Brother Thomas is a beast in short range combat and healing, with him having the highest skills in both surgeon and field medic of any recruitable NPC. He is a good choice as a close up support unit for units with a lot of either brawling or close combat weapons.

His luck is bad, but his intelligence of 8 means he gets 4 skill points a level, meaning he can fully be upgraded rather quickly.

Retrieved from "https://wasteland.fandom.com/wiki/Brother_Neil_Thomas?oldid=19833"
Community content is available under CC-BY-SA unless otherwise noted.