Brother Wright is a character in Wasteland 2. 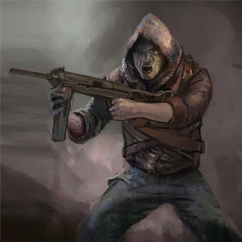 Brother Wright is a former member of the M. A. D. Monks who was dispatched by Father Enola to retrieve the Titan II inter-continental ballistic missile armed with a nuclear warhead stored in Silo 7

He lost his faith in the glow after discovering that the Titan II ICBM in the Temple of Titan he and the other monks worshiped as a god, didn't have a nuclear warhead.

Thus, he decided to disarm the Titan missile in Silo 7 so it never fell into the wrong hands but was unable to ever figure it out. Enola often sent other monks to take him down, but they all failed as he had fortified the place well.

Brother Wright won't be hostile to you when you encounter him and will ask about your identity. He will regardless accept that he was unsuccessful in his task and will leave the fate of the Titan missile up to you.

Retrieved from "https://wasteland.fandom.com/wiki/Brother_Wright?oldid=21397"
Community content is available under CC-BY-SA unless otherwise noted.