Buck Hinges is a character in Wasteland 2. 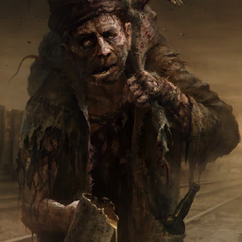 Buck Hinges is a smelly old drunk carrying around a fake World War II-era bomb. He decided to use the fake bomb to expose that the Titan ICBM in the Temple of Titan is a dud which the monks are using to keep everyone in line, after hearing the rumour about it.

He'll refuse to talk to you in case you've got Brother Shapiro in tow. The Smart Ass skill can be used for some extra dialogue after asking him about Titan being fake.

You can convince him to lend you some of the equipment he has by using the Kiss Ass skill, thus you'll earn the Kevlar Vest and 8 Energy Cells.

He will fall asleep after you talk to him 6-8 times unless you give him Snake Squuezins, which will extend the amount of times you can talk to him.

Retrieved from "https://wasteland.fandom.com/wiki/Buck_Dinges?oldid=20565"
Community content is available under CC-BY-SA unless otherwise noted.