Captain Peppard is a character in Wasteland 2. 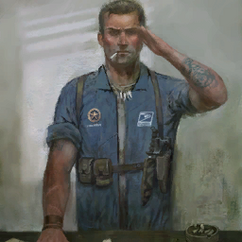 Peppard is a Desert Ranger and the leader of the elite squad Team Able. He has a very cocky attitude.

You'll meet Pepper for the first time outside Ranger Citadel, after you save Highpool or Ag Center. He is seen leaving alongside his team for a mission, he will talk to you for a while when he notices you.

Peppard is based after Hannibal from the 1980s TV show "The A-Team". His name is taken from that of Hannibal's real-life actor George Peppard.

Retrieved from "https://wasteland.fandom.com/wiki/Captain_Peppard?oldid=21701"
Community content is available under CC-BY-SA unless otherwise noted.