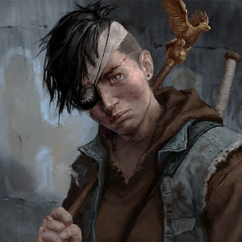 Chaos Pistoleer are a type of human enemies in Wasteland 2.

The Chaos Pistoleers appear in case you disarm the Titan II missile in Silo 7. Chaos breaks out in the territory of the M. A. D. Monks as other people discover that the Titan missile of the monks is unarmed.

They are raiders who take over the area after Titan is disarmed and are named so because of their use of handguns in combat. They are equipped with a .38 Revolver.

Retrieved from "https://wasteland.fandom.com/wiki/Chaos_Pistoleer?oldid=21104"
Community content is available under CC-BY-SA unless otherwise noted.