Clawer is a robot enemy in Wasteland 2. 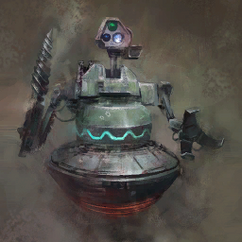 The Clawers are robots produced in Base Cochise by the facility's AI to wipe out humans. It is named so because of its claw arms. They were de-activated after the destruction of the base, but were re-activated in 2102.

They are similar to the Robot Clawer.

Retrieved from "https://wasteland.fandom.com/wiki/Clawer?oldid=20911"
Community content is available under CC-BY-SA unless otherwise noted.