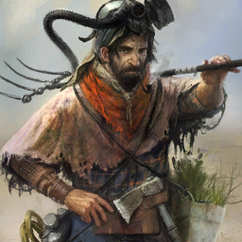 Clyde is a character in Wasteland 2.

Clyde is a water merchant from Damonta who trades between western and eastern Arizona. He was ambushed in 2102 by the Diamondback Militia while traveling through the Canyon of Titan.

He was robbed of his goods and left for dead along with his two surviving guards, while his water tanker was destroyed. Beau was sent to get help from the Mad Monks, but he never returned.

He was also good friends with David Barnes, the owner of Silent Springs Water Corporation in Damonta. The latter was killed when the robots in the airplane graveyard became active and started killing the townsfolk.

When first encountered, Clyde will ask the player for water. If you do give him water, he'll inform you about what happened to him. He'll also ask you to inform Outpost Three to help him. He will be killed along with his stranded party if you do not agree to help them.

Retrieved from "https://wasteland.fandom.com/wiki/Clyde?oldid=21211"
Community content is available under CC-BY-SA unless otherwise noted.