A pre-War government research facility with a nearby town original built for the researchers and personnel of the base.

Darwin was part of a network of research facilities that had been established in Nevada and Arizona, each dedicated to various fields of research with military applications. Project Darwin's focus was biologics and genetics, developing new kinds of medicines but also biological weapons such as viruses. Last Darwin's genetic engineers were also working on developing 'useful' new life for projects such as the terraforming and colonization of Mars. The facility was intended to be fully independent and was made up of a research facility and a nearby town with everything needed for the personnel for long term habitation. Darwin was spared from the nuclear exchange and suffered little from the secondary effects, continuing on as it did before the great war. Some people even believed that Darwin's leader, Irwin John Finster wasn't even aware that the war had happened.

The truth about Darwin was eventually revealed when a group of Desert Rangers came to town to investigate leads from Max. They discovered the truth about Finster's plans for the wasteland and Darwin's new focus on creating life that would replace the old humanity. The Rangers shut the project down permanently, firebombing the labs and killing Finster. After hooking his head up to a virtual reality machine, they learned critical data from what remain of Finster's psyche.

Remnants of Darwin and Finster's followers would form a community in the burnt out ruins of the laboratory. By 2102, a stable community of mutants, the descendants of the scientists and personnel of the base who have been deformed by the effects of Finster's mutagens and the radiation continued their work in secret, hoping for a time when humanity would be responsible enough to use this kind of science. The mutants saw themselves as the custodians and guardians of Darwin and that that their mission was to preserve the research and knowledge of their ancestors until mankind was ready to use it wisely to rebuild the world.

This isolation from the outside would be maintained for a long time until a steel monk came to Darwin in 2102 to search for Finster's collection of genetically engineered diseases. Most likely the steel monk intended to use these against the Desert Rangers and other people of the Arizona wasteland. Mutant defenders tried to stop the steel monk from accessing the secure cabinet containing the diseases but they could not prevent it from breaking at least one vial before it was taken down. Only Jan managed to escape the effects of released disease, locking herself up in a germ proof isolation room. The released disease quickly spread across the mutant population with the effects being intelligence being diminished and the infected becoming highly aggressive against non infected.

The few remaining mutants who had not fully succumbed to the disease tried to spread a remaining batch of universal antidote, one of the medicines developed at Project Darwin, through the air filtration system to cure the affected population but were unable to do so before the disease fully struck them. Eventually a new group of Desert Rangers, Team Echo came across Darwin when they were instructed by their superiors to see what was left of the settlement and determine if there were still any inhabitants. They faced several of the infected mutants in the streets before they could enter the underground facility through a hatch that was protected by a security gate.

There the Rangers found the remains of the fight between the mutant defenders and the steel monk as well as Jan who was still trapped in the isolation room. She informed the Rangers of the history of Darwin, the mutants and their goal, and the incident with the steel monk and the release of the disease. 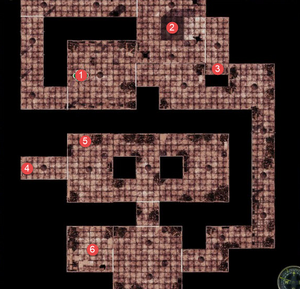