Discobot is an enemy robot in Wasteland 2. 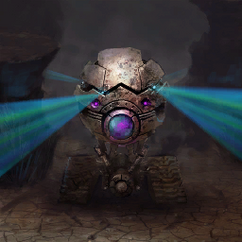 A robot created by the Base Cochise AI, its main function to disorient its human targets. The discobot is so named because its strobe lights function just like lights from a disco ball.

The Discobots can drop a Hard Drive, Optical Eye or Warranty Sticker.

Retrieved from "https://wasteland.fandom.com/wiki/Discobot?oldid=20809"
Community content is available under CC-BY-SA unless otherwise noted.