Doc is a character in Wasteland 2. 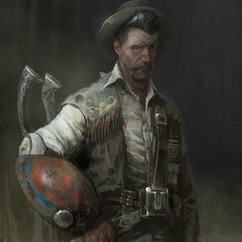 Doc is called so because of his profession as a doctor. He works with the cowboys under the command of Jill Yates and also fixes them up in case they get injured. In 2102, his group was ambushed but managed to escape by reaching the territory of the Mad Monks. Doc however got stabbed in the fight and was severely wounded.

The players will find Doc wounded when they first encountering him and he won't talk to you. Jill will request the player to patch him up. You'll need at least a level 5 rank in the Surgeon skill to have a good chance of fixing him. If you are successful, he'll sell you medical items at negligible prices, but won't buy anything from you.

He can also be encountered at Damonta, having barricaded himself along with Jill and other members of his party in a room of the Jet View Motel in the southeast corner of the map. He will offer medical items again, but his price will be much higher this time. He will also buy any items you want to sell.

Retrieved from "https://wasteland.fandom.com/wiki/Doc?oldid=20792"
Community content is available under CC-BY-SA unless otherwise noted.