Corporal "Flintlock" Eggleston is a character in Wasteland 2. 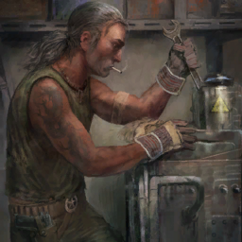 Flintlock is the oldest member of the Desert Rangers and a veteran who has been around even before General Vargas. His name "Flintlock" is a humorous reference to his age.

He's become a fatherlike figure to Vargas and looks after the "Museum of Unnatural History" inside the Ranger Citadel, while also conducting tours for recruits.

Thrasher describes him as an incessant chatterer but still gets along well with him, especially since he keeps the new recruits from bothering him.

Flintlock will offer you rewards for any valuable relic you bring back to him. He can also give you a tour of the museum in the Ranger Citadel once you have talked to Thrasher for the first time.

Retrieved from "https://wasteland.fandom.com/wiki/Flintlock_Eggleston?oldid=21605"
Community content is available under CC-BY-SA unless otherwise noted.