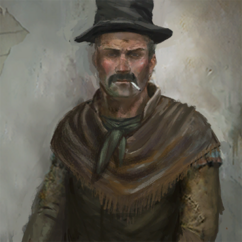 Hector Nguyen is a character in Wasteland 2.

Hector Nguyen is a restaurateur who owns the restaurant in Damonta called "El Sagon Diner", which offers Vietnamese-Mexican dishes. He is married to Carla and has a daughter named Binh.

In 2102, the robots in the airplane graveyard became active and started attacking the town. Hector and Carla barricaded themselves in their restaurant but were trapped by robots just outside the door.

You can rescue Hector and Carla by destroying the robots outside their door. They will open it upon learning that the robots are gone and Hector will ask you to find their daughter Binh.

Retrieved from "https://wasteland.fandom.com/wiki/Hector_Nguyen?oldid=21075"
Community content is available under CC-BY-SA unless otherwise noted.