The Honey Badger is an enemy creature in Wasteland 2. 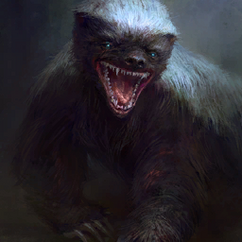 The honey badger is a subspecies of the badger and is known for its aggressive nature and an omnivorous diet. Honey badgers are dangerous creatures that have no trouble taking on a squad of rangers if it so desires.

They are mutated versions of the pre-war honey badgers. There are no species of them native to the US, so how and where these honey badgers came from is still a mystery. Whatever the case, they should be handled with extreme care.

These annoying creatures can spell the early doom of an inexperienced ranger team. Usually attacking in groups of 2 or more, Honey Badgers are slow but make up for this by having a thick hide, which makes them difficult to take down with kinetic weaponry.

During the course of the Arizona part of the game, Honey Badgers are a common occurrence, and can in many ways be tougher to take down than similarly leveled human opponents, as they will try and get in close to your Rangers, leaving people with assault rifles or sniper rifles woefully overwhelmed.

They are armored with high CON. When fighting a Honey Badger, it is a good idea to use laser weaponry, as it more easily penetrates the creature's thick hide, while also giving a damage boost due to the armor penetrating abilities of laser weaponry.

Explosives are another effective option for dealing with honey badgers, as the damage dealt by explosive weapons ignores armor. Further, using Focused Shot on their torso to make them more susceptible to damage works well in combination with burst fire.

Whenever possible, do not let Honey Badgers close in. They have enough AP to attack twice and they can take down a ranger with about 100 CON in 4 to 5 hits. Do not try to engage in melee combat with them, as they are specifically equipped for that and can inflict "Bleeding Wound" which will cause a large loss of CON.

On the Director's Edition of Wasteland 2, it is easier to handle them by crippling their limbs with high combat initiative pistol/SMG ranger than gunning them down from optimal distance.

Even by the time a Ranger team can effectively handle Honey Badgers in close combat, it has been less time and resource intensive to just shoot them from a distance.

Retrieved from "https://wasteland.fandom.com/wiki/Honey_Badger?oldid=20024"
Community content is available under CC-BY-SA unless otherwise noted.