Hopi is a character in Wasteland 2. 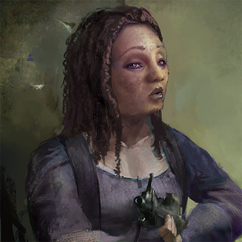 Hopi is a mechanic who works at the Palomar Garage in Damonta, looking after the appearance of a car. She is nicknamed Hopi due to being a pure Native American from the Hopi tribe. At some point of time she fell in love with Magee, who works with her at the garage and handles the mechanical work.

The two married at the temple of Titan, because Hopi thought she was very beautiful and no place would be better than one with a nuclear bomb. As a wedding gift, Hopi brought Magee a Discobot they named Jaime, but they couldn't figure out how to make him obey their commands. They also owned a machine gun nicknamed "Big Betty".

In 2102, robots in the airplane graveyard of Damonta suddenly became active and started attacking the townfolk. Hopi and Magee tried to fight them off using their machine gun, but it jammed at an inopportune moment, leading to them being trapped in the garage with the robots outside.

You can assist Hopi by destroying the robots that have her trapped. In return, she will unlock the door to her garage and will trade with you. She will also let you in on her background and let you take Jaime if you can fix him.

She will tell you to help her if you try to talk to her while she is trapped by robots. Vulture's Cry will talk to Hopi in Spanish after you are done talking for the first time. Hopi drops a lot of ammo upon being killed.

Retrieved from "https://wasteland.fandom.com/wiki/Hopi?oldid=20829"
Community content is available under CC-BY-SA unless otherwise noted.