The Jailor is a character in Wasteland 2. 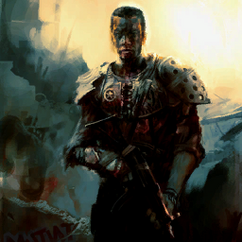 The jailor is tasked with guarding the jail of the Ranger Citadel and looking after the prisoners.

Upon telling him you need to talk to Rick Baychowski, he'll wake him up. He'll release Rick after you convince the latter to take you to his hidden rad suit stash.

If you try to open jail cells without permission at least three times, he'll become hostile.

Retrieved from "https://wasteland.fandom.com/wiki/Jailor?oldid=19776"
Community content is available under CC-BY-SA unless otherwise noted.