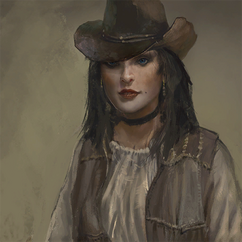 Jess-Belle is a farmer[1] who lives in Highpool during the events of Wasteland 2.

Jess-Belle is an oddly idealistic woman who has been raised on virtues of honor by her father who used to read her stories from a book about honorable knights who would go on quests and princesses.

When she was young, she used to play card games with her father who often cheated, but she memorized the marks on his card due to which she was able to win every time. She mostly sees men as whoremongers, and believes she can find a honorable man with her dowry. Her father however lost her dowry in gambling and ran away, lying to her that he was going to search a suitable husband for her in the Wasteland.

Jess-Belle appears only in Wasteland 2.

Retrieved from "https://wasteland.fandom.com/wiki/Jess-Belle?oldid=22453"
Community content is available under CC-BY-SA unless otherwise noted.