Jill Yates is a character in Wasteland 2. 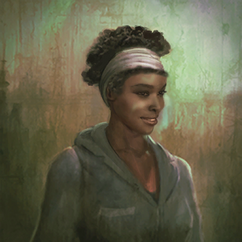 Jill is an old African-American woman and the leader of a group of cowboys who herd cows between the settlements in eastern Arizona. In 2102, they were ambushed by a group of raiders but were saved when they reached the territory of the Mad Monks.

Upon first encountering Team Echo, she will ask if they have a medic among them. She will become hostile if you kill her group's cows or cause the death of any of the cowboys.

If you fix Doc's wounds using the Surgeon skill, she will reward you with 100 scrap and will also ask you to find Bart. If you anger Howdy, she will become hostile as well.

She can later be encountered at Damonta, having locked herself with her party in a Jet View Motel room after robots ambushed her. She'll have it opened after realizing you are outside and will request you to find her cows.

Retrieved from "https://wasteland.fandom.com/wiki/Jill_Yates?oldid=20761"
Community content is available under CC-BY-SA unless otherwise noted.