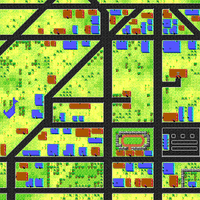 Vegas is the city of Las Vegas. No one is quite sure how the Soviet missiles managed to miss the city, but most folks figure it was because the “house” was betting against a missile landing – and no one wins against the house. There was an international rumor about some Russian general’s markers being torn up after the attack, but that has yet to be confirmed. Undaunted by its brush with perdition, Vegas is still open for business and does very well for itself. The city is large enough to avoid conquest, and many elements of the desert rabble have even found gainful employment as enforcers or casino employees. Despite the relative success of the city, however, there are dark rumors about horrors descending from the north to taking up residence in the city sewers. All may not be extremely well in the jewel of the Desert.[1]

Las Vegas is large city that the player will explore approximately mid-game (after Needles) as it requires rifle-level firepower. It is filled with abandoned buildings (a very few of which contain stashes of loot) and nasty robots, including the infamous Scorpitron. It is in Las Vegas that the player finally encounters Faran Brygo, a plot element obviously derived from author Brian Fargo's name.

In the golf course is a stash of RPG-7s that can be retrieved by using a Shovel. This stash also contains a Sonic Key.

Enemies in Vegas are tough: equip your team with M1989A1 Nato assault rifles and the best armor you can find, and prepare to slug it out with death machines. Warroid Mark 1's, Sniperdroids, Slicerdicers, and Chopters are easy; Warroid Mark 2's are tougher, Warroid Mark 3's can be nasty. The RadAngel is a fixed encounter near the Temple of the Mushroom Cloud to the center-east part of town; Thugs can be encountered near Fat Freddy's and the Racetrack, a team of Cyborg Commandos is near the Vegas Jail in the northeast. The Scorpitron is in the center of town and is the toughest foe on the surface of Vegas - it has an AC of 10 (equivalent to Pseudo-Chitin Armor), can have anywhere from 50-250 hit points, and dishes out 9d6 damage per burst - fortunately, there's only one of them!

Temple of the Servants of the Mushroom CloudEdit

The Mushroom Temple can't be missed: it's easiest to approach from the central eastern section of the map from the desert. The Mushroom Temple contains the entrance to the sewers, and thus is a must-visit if you want to progress further in the game. The password is either "Oppenheimer" or "Einstein", or you can say you have a gift, and say "Bloodstaff". Alternately, you can blow down the doors with TNT and slay the Temple Guardians that spawn to fight you for a lot of additional experience.

Some of the doors respond to Picklock, others respond to Electronics or TNT. Using a Sonic Key (kill the Cyborg Commandos, or dig it up at the golf course stash) you can open the wall to the west of the central reactor room and access the sewers. The Temple also has a stash of weaponry to the west and armor to the east before the main reactor room (including M1989A1 Nato assault rifles and Rad suit. Charmaine carries a Laser pistol.

The player is strongly cautioned if entering combat in this location to avoid radiation. Rad Angels leave behind radiation in the space they die in, and a Nuclear Technician throws a radiation grenade at you in the reactor works if assaulted, leaving another radiation spot. Keep Rad suit on hand to deal with this nuisance. If you're feeling mischievous, you can tinker with the controls using Electronics and shut down the reactor's coolant, forcing a meltdown, which both opens all of the doors in the place and simultaneously floods most of the building with radiation. Your call!

This is also where the player can recruit Dr. Mike Scott and there is a hospital for those in need.

Access to the Sewers can be gained from within the Mushroom Temple. Use Picklock and Electronics or TNT to blast your way into the main reactor room, and then go west. In the room with the massive humming electronic equipment, go to the southwest corner. If you have high enough Perception, you'll notice a strange keyhole in the wall. Use the Sonic Key to open it. Go north along the hall into the next room, and go to the northeast corner of that room. You'll discover another door that opens with the Sonic Key. Pop the door and you'll find the ladder down into the Sewers.

A word on what to bring to the sewers. First off, you'll want good armor: you may want to consider going to Darwin Village and visiting the Black Market to grab a Kevlar suit for everyone. Since you'll likely be burning through 7.62mm Clips like crazy by emptying your M1989A1 Nato assault rifles at the cyborgs down there, you'll want a hefty stash for each of your Rangers. Bring at least two pieces of Rope - you'll need them to cross the river and a chasm down there. And last, but not least, think about bringing a Shovel, Pick ax or Sledge hammer to break through the weakened walls down there and open up the passages: a character with exceptionally high Strength also will do the trick.

As you proceed through the Sewers, you'll find various parts of Max. Here's a listing of noteworthy loot by section:

You'll have to bash a path through weak walls to the south to enter the second area. Use a Sledge hammer, Pick ax, Shovel, Strength or TNT to get through. The second area shares the same map as the fourth, but they're divided by impassable walls, necessitating going through the third area. In the third area, there's another weak-wall path to the north (you need to get through there to get the Android head to complete repairs to Max. Don't even try to cross the river: you'll get sucked out of the Sewers into the river outside of Vegas! Watch out when trying to enter the fourth area from the third: on the southern edge of an out-jutting wall near the door, there's some spikes that can do some pretty nasty damage. You'll need the Sonic Key to get into the Lab.

Fat Freddy is the local gangster in Vegas, arch-rival to Faran Brygo. His base is a casino; it's two houses north of Spade's Casino. You'll know the place because Thugs will attack you when you get close to the door. The password is "Bird". If you accept Freddy's offer, you'll get $1,000 in cash and get to go fight Faran; after you get his ring and come back, Freddy will attack.

If you decline Freddy's offer, you get gassed. Party members with Gas masks in their inventory aren't affected; everyone that doesn't have a gas mask (including those who are Serious, Critical, Mortal, Comatose, or even Dead!) are set at Unconscious status. If the entire party goes unconscious at this juncture, you wake up in Vegas Jail. If you've already freed Covenant, you're stuck, unless you've got a second group waiting to spring them from the outside: disc swapping may help if not. If you haven't freed Covenant, you can use Dexterity to free yourself, and Picklock to free Covenant. Hire Covenant, and he can get you through the cell door from the inside.

This building is the red building just to the east of the joining of the three streets in the north-central portion of town (near where the Scorpitron lairs). The password is "Kestrel", and tell them Crumb sent you. If you give them either of the fake passwords from the paragraph book ("Phoenix" or "Clover"), you get in, but the entire party gets Wasteland Herpes!!! Faran Brygo's place is where you'll get the mission to find Max.

Alternately, you can tell Faran what he can do for you, or attack: Faran will flee, and you'll have to hunt him down inside his compound. Get his Onyx Ring and give it to Freddy to get your "reward".

This is the blue L-shaped building south of the golf course (in the western end of town). Stop by the bar, and you'll meet Crumb, who gives you the password to Faran Brygo's place ("Kestrel"). Other than that, this location is a Gambling hall and potentially a huge fight if you feel like mowing down the crowd. Two Laser pistols can be found here, as can a Kevlar suit.

This is the building to the southeast of Faran Brygo's (in the map on this page, from the central axis of the three streets, it's the second building on the south side of the east-west street going east from the central axis. This building contains a few minor fights, but the reason we're mentioning it is because one of the enemies drops a Proton ax, the most powerful melee weapon in the game. Get it! There are Gundroids found south of this building: fight them for an AK 97 assault rifle, some 7.62mm Clips, and a Sonic Key!

A large blue building in the southwest end of town (on Flamingo Avenue, the second street from the south edge of the map). It's on the north side of the street. Across the street are some cacti. An Exam runs $100 here; Healing runs $10 per CON point.

Building on the northeast corner of the map. This is where you'll wind up if you mess around with Fat Freddy without having at least one character in your party carrying a gas mask. This is also where you can break out Covenant. There's a trapped stash here which includes 9mm clips, 45 clips, Grenades, Jewelry, M1911A1 45 pistols, VP91Z 9mm pistols, and cash. You can also find the Cyborg Commandos south of this building and get an AK 97 assault rifle, some 7.62mm Clips, a Kevlar suit, some cash, and another Sonic Key!

Building on the southeast corner of the map. Teaches the following skills:

Retrieved from "https://wasteland.fandom.com/wiki/Las_Vegas?oldid=22216"
Community content is available under CC-BY-SA unless otherwise noted.