It's the Hispanic Heritage Month at FANDOM! It's worth noting that Wasteland, 33 years ago, was one of the first games to allow players to create Hispanic characters with the nationality selection. What's more, the starting Hispanic character, Snake Vargas, eventually became one of the most important movers and shakers of the Arizona wasteland, saving the world twice over as a Desert Ranger! If you're interested in learning more about Hispanic heritage and how it's featured in modern entertainment, join the official Fandom HHM Discord server!

Back to GameX page

Each MSQ block is self-contained, the data within each block can be described as in the following image. Each of the sections of the MSQ block are stored or encrypted differently. The game employed a sort of 'just enough' encryption scheme. Each section was encrypted just enough to make it difficult to decipher.

Encryption Routines for each Section[]

Apart from the "save game" block, each of the MSQ blocks in the gameX files adheres to the same general structure: 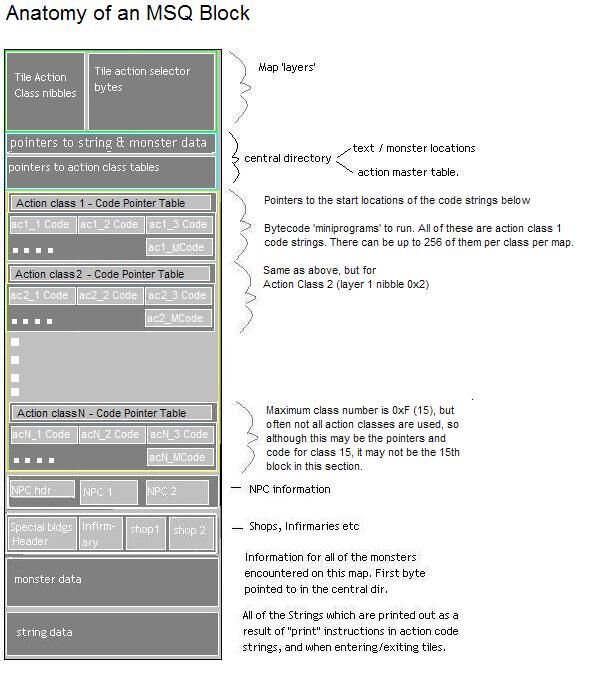 For an example of how this information is used, see the player movement flowchart for a runthrough of a user 'moving' their character onto an 'interesting' tile (i.e. with something that happens, like a skill check or encounter).

The actions that occur on each of the maps are controlled from the first three sections of that map's MSQ block. We call these the "map layers". The size of each layer is dependent upon the size of the map. common sizes are 32x32 and 64x64.

While the user is walking around the map, certain actions are triggered. In order to keep things neat and tidy, these actions are sorted into classes. Each tile in this layer is represented by a nibble, therefore there can be up to 16 different action classes. Once an action has been run, this layer can be modified to change the trigger class for the tile. For example, the cave entrance in Highpool starts off as a "stat check" class. Once the player completes the action, the class is changed to a "location change" class, and the selector layer is changed so that the player is transported to the caves when (s)he steps on the tile.

The action classes layer defines which _type_ of action is performed, however, one more layer is needed to select which exact action is run. Each tile in this layer is represented by a byte, therefore there can be up to 256 different actions in each class. This is extremely flexible, and allows for fairly rich maps. The way it is most effectively used is to give each 'interesting' tile a different ID, and place this ID into the selector layer. Like the Action Classes Layer, this can be modified so that the tile has a different effect once the action has been completed.

The Map Info block is a 54 bytes long block following immediately after the central directory. It contains various information about the map like the encounter frequency, time factor, tileset id and so on.

This is a huge chunk of bytes. Each of the action code strings is a parsed bytecode instruction string, which can perform tasks such as printing out strings, modifying map and player data, checking for appropriate stat levels and so on.

Each of the maps can contain some shops. The shop data section is divided into a header, which gives the offsets to each of the shops, and the actual shop sections themselves

Each map can contain NPCs, which can be hired, etc.

This block contains all of the information about the monsters which occur on this map.

Contains a huffman-coded set of strings which are printed out in response to various actions or triggers.

How was all this found?[]

The layout of the MSQ blocks has been under study for quite a long time. It's absolutely certain that early hackers will have had a good crack at decoding the game. In the lifetime of this project, work was initially started by some members of this project, and some great discoveries and visualisations done by Ian Goodale from the Wasteland Yahoo Newsgroup. Help was also pitched in by other major contributors to the newsgroup, including Ranger Ben, Another Ranger called Ben, Wild Bill, Nick, and Ian. Work ground to a halt at the end of 2004, and was picked up in 2005 by Displacer, with some algorithmic help from Nick. Eyemixer joined the project, also contributing visualisations. In mid-2006, Ian Goodale updated some of his visualisations of the map data, and along with some of the new utilities and Eyemixer's talents, we now have some excellent graphics of what's going on inside the game.