Marco Caminada is a character in Wasteland 2. 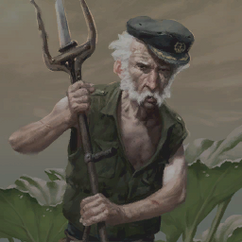 Marco and his wife Celia are farmers who live in Happy Valley around The Prison. Marco is a drunk and addicted to Snake squeezin. He often refuses to help his wife in chores.

While some of the others had started moving to Damonta, they didn't as they were old and always tired. The Red Skorpion Militia forcibly took away their crops and farm equipment while also refusing to help with their broken well.

Marco will refuse to talk to you whenever you try initiating dialogue. He will however sing various songs and complain to his wife before you initiate dialogue.

He will be killed by the Red Skorpion Militia alongside other Happy valley residents after you hook up the repeater unit to the Damonta radio tower.

Retrieved from "https://wasteland.fandom.com/wiki/Marco_Caminada?oldid=21378"
Community content is available under CC-BY-SA unless otherwise noted.