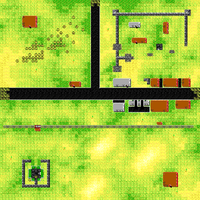 Needles is bigger than Quartz. Aside from the flood that resulted when Hoover Dam was hit, life has not changed much in Needles. Needles is big enough to defend itself from roving bandits. However, it has become home to a couple of odd cults. The folks in Needles don't really like strangers that much, but they’ve welcomed Desert Rangers in the past and are always willing to trade goods with them.[1]

Needles, before the war, was a medium size town with an adjacent major military base within city limits. The city was near an ICBM missile silo and the corresponding missile storage base. The city became a high priority target for the Russian-Chinese invasion and came under heavy attack from the invading forces(the silo crew managed to launch, though, and destroyed the launch room with explosives afterwards). While the invasion was repelled, most of the US forces were destroyed in the process, Needles was wrecked, the military bases heavily damaged and the nuclear fallout was coming. Needles military contingent was mostly evacuated, and military supplies left behind, including a military howitzer. The flood that occurred when the Hoover Dam was hit contributed to this.

Years passed and slowly prosperity came back to Needles. A powerful police force was established to control crime in Needles, operating out of the abandoned military base. Mostly ex-military personnel, they rebuilt most of the base and established their attack cop squadrons.

The local leather jerk gang is kept in check by the attack cops, however, occasionally, they cause trouble for the local citizens or outsiders, but are quickly pacified. Currently, the locals are a bit xenophobic. It is big enough to defend itself against roving bandits, but a few religious cults have managed to find their way here.

The main part of Needles is the downtown area. Heavily shelled by artillery fire, it nevertheless survived. Rebuilt after the war, it is now the center of activity in the town, although gaping holes still remind of the town's troubled past and gutted car wrecks litter the streets. The western part of the city is home to the desert-famous Hobo-Dogs (made out of real hobos! Yum!) fast food outlet, the office of Bill Dugan, Temple of Blood's representative, a large restaurant on an elevated platform (most often half-empty, except during the evenings) with the Crowley's Occult Shop located just below it, along with a long abandoned movie collectibles shop and an abandoned art gallery where bums now tend to sleep. Another important element of the western part of Needles is a local outpost of the Temple of Blood, with a Bloodstaff identification device and a fully functional howitzer which can be used to shell Needles once again.

The eastern part of Needles houses Leroy's Place, which was once a clothes shop, turned into a bar and weapons store. Another is the classy Acapulco club (members only), Rosie's Motel (with a sexy three legged prostitute), a local Jerk loitering spot (where Christina can be found) and their Leader's meeting place, obscured by rubble.

Downtown is also the place where religious fanatics of both the Temple of Blood and the Servants of the Mushroom Cloud seek converts.

To the north lies the old military base. Now controlled by the police, it was partially rebuilt and now houses the town's library, doctor and police headquarters. The headquarters act as barracks for attack cops, who attack anyone who breaches the perimeter of the station with one is stationed at all times to protect the robot clerk. The amount of gang activity in the city generates a lot of paperwork and the clerk is usually occupied. The building also has the office of Spam Shade, the local detective, an expert in homicides, who was part of the Temple of Blood investigation as well as a jail. Mort is incarcerated here.

Another important facility of the police station is the morgue, where the deceased are kept in low temperature storage. Among the dead was Bill Dugan of the Temple of Blood, who died of radiation poisoning, C. Christensen who died of Anthrax and T. Gonif, a victim of cirrhosis. The morgue is adjacent to the communications center, which was mostly destroyed in the fighting. Currently, only the pigeon mail survives.

The last notable element of the station is the armory, protected by an automated high caliber turret.

Another element of the military base in an old ammo bunker. The forbidding darkness of the military storage facility as well as the existence of volatile explosives deter people from visiting it. The rusting hulk of an M3 RATT can be found. Here also, a Servant of the Mushroom Cloud that was sent out to investigate the Bloodstaff murders, ironically, ended up being killed by it.

To the south of the downtown area lies the still used railroad line, with a locomotive regularly doing its rounds. Further south are the famous sand shifting dunes of Needles and a church of the Servants of the Mushroom Cloud, a Temple of Blood rival. In the west lies the old ICBM silo, occupied by the Pit Ghoul and used as the town's waste dump... and occasional sacrificial murder spot.

Retrieved from "https://wasteland.fandom.com/wiki/Needles?oldid=22468"
Community content is available under CC-BY-SA unless otherwise noted.