Edit
watch 02:46
The Quarry - The Loop
Do you like this video?
Play Sound

Playa del Rey is a location in Wasteland 2.

A small settlement on the western end of Los Angeles, Playa del Rey is inhabited by a peaceful group of wastelanders who want just to survive the day and make their ends meet. Or rather, it was inhabited, until a group of Children of the Citadel dressed as Desert Rangers wiped out the populace, painting the Ranger star for all to see, with the blood of the inhabitants.

The Rangers appear at the Playa too late to help the inhabitants. The area is being scoured for evidence by a Mannerites patrol, which will lead to an altercation and problems with the Mannerites down the line, unless:

Note that there's a GPS unit behind the shipping container next to the Mannerites, which can be safely interacted with. Repairing it requires very high Mechanical Repair to have a decent shot at fixing it (it has a difficulty level above 10) or use the Display Screen found at Darwin. 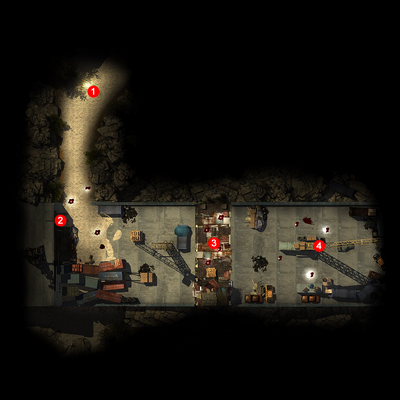