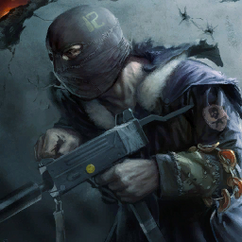 Raider Commandos are a type of human enemies in Wasteland 2.

The raider commandos are only encountered in eastern Arizona. They are equipped with an Uzi and can deal a high amount of damage.

Raider commandos are encountered in Canyon of Titan and will become hostile immediately unless you have an escort from the Mad Monks accompanying you. Two can be found at the raider fort in the northwest.

A dumb commando can be found at the southeast end of the map and will get angry if you try to take radioactive waste from the drum in the raider outpost. You'll need to have a level 7 rank in Smart Ass to have him accidentally kill himself.

Retrieved from "https://wasteland.fandom.com/wiki/Raider_Commando?oldid=20333"
Community content is available under CC-BY-SA unless otherwise noted.