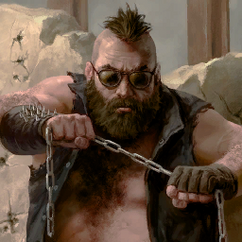 Raider Lobbers are a type of human enemies in Wasteland 2.

Raider lobbers only exist in eastern Arizona and are named so because they use explosives in combat. They are equipped with TNT.

Raider lobbers are first encountered in the Canyon of Titan. One can be found at the raider outpost to the west of Skunk Pig.

Retrieved from "https://wasteland.fandom.com/wiki/Raider_Lobber?oldid=20336"
Community content is available under CC-BY-SA unless otherwise noted.