Ranger Citadel is an important location in Wasteland 2 and the headquarters of the Desert Rangers.

Formally the Guardian Citadel, now in Wasteland 2, the new home of the Rangers, and where you start the game.

You cannot enter the citadel when the game first begins. You start just outside, at a funeral in the local graveyard. There, on the exterior, you'll find a few characters to talk to, one NPC to join your party, a vendor, and a few stashes that may be dug up with a shovel. But then you'll soon need to start your adventure by heading out into the wastes.

You start the game in this area, in a conversation with General Snake Vargas, having just completed the "retirement party" (funeral) of a fellow Desert Ranger. This opening conversation gives you your marching orders, the game's opening mission/quest, offers the opportunity to acquire some background information that occurred in the previous game, and has the potential to be where the first XP in the game are acquired.

Near or at the end of the conversation with General Vargas, you will encounter the option to use a skill in the game. Upon learning that you're not allowed inside the Citadel until you prove yourself with your initial mission, you have the option to use any of the game's three speech skills (Smart Ass, Hard Ass or Kiss Ass) at a level 0 challenge difficulty. None of the options will grant early access, but Vargas will make a comment based on the skill used, and you gain a small amount of XP for any option.

Following the conversation, there is a Shovel nearby, which you should pick up. The immediate vicinity has General Vargas, two mourners beside Ace's grave and a large number of tombstones nearby that can be examined. Although graves are normally diggable (lootable) objects in Wasteland 2, Ace's grave cannot be desecrated just yet.

Heading down the path in the only direction available will very shortly lead to the Citadel's main gate, guarded by Grenadier Major Nur Giebitz. Engaging Giebitz in conversation offers another chance to use a conversation skill (Kiss Ass or Hard Ass), which will grant XP, but no early access. After either option, a conversation path opens up where he'll give the party his Mississippi Mule Shotgun and 10 shotgun shells. Using the "Door" dialogue choice twice will cause him to attack.

Past the main gates, over a small bridge is the game's first merchant, Cpl. Solveig Sefors, who can also be conversed with for more background information. Beside her is a well head, which can be used to top off the party's canteens, allowing the party to venture back out in to the wilderness without dying of thirst. Though your canteens start out full, you will probably want to use this object on most subsequent visits to this map.

Rook, one of the recruits, initially requests that the party pick up the tin can near the goat. Examining the can will suggest that it may be unwise to pick up what could be a goat's next meal. Picking it up anyway will result in gaining a piece of salable junk in the party's inventory, and will cause the goat to headbutt the party member picking it up. Rook laughs at this, but there seem to be no lasting effects from this interaction.

A character with points in the Animal Whisperer skill can recruit Aberforth, who will follow the party member who recruited him, granting the "Devil Eyes" effect, +1 Awareness.

Ahead is a 3-way T junction in the path, with the exit to world map at the top of junction. Just east of the exit is a diggable spot in the ground, which can be looted by using the shovel on the spot.

To the west is Ranger Brass Knucks and another diggable spot in the ground. If you encounter a can of spray paint in your travels, bring it back to him for a reward.

To the East is Angela Deth and two more diggable spots in the ground. She provides some dialogue about Ace, some background information, and is the game's first possible follower, as she offers to join your party to hunt down Ace's killer. At level 14, she is a powerful addition to any starting party and comes equipped with a M1-1 Carbine, 10 7.62 Rounds, Ace's Wrench, Faded Letters, Pain Relievers and a Canteen. Her combat skills are in Blunt Weapons and Assault Rfles, and non-combat skills are in Hard Ass, Outdoorsman and Weaponsmithing.

Initially, there is nothing more to do in this area, so it's off to the exit and the Radio Tower. 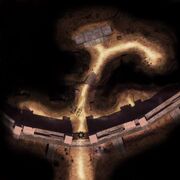 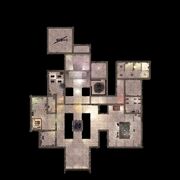 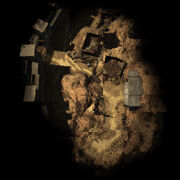 Retrieved from "https://wasteland.fandom.com/wiki/Ranger_Citadel?oldid=19049"
Community content is available under CC-BY-SA unless otherwise noted.