Red Baychowski is a character in Wasteland 2. 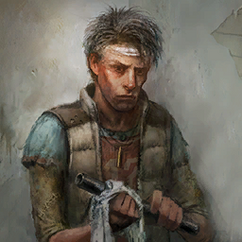 Red is a scrap merchant who works in the Happy Valley area of The Prison and is the brother of Rick Baychowski. His junkyard is located on Goat Hill. He also occasionally trades in Rad suits.

He will deny knowing about Damonta at first but when prodded, will tell you how to get there. He'll also tell you about the Ranger named Baychowski who had been there.

He'll be encountered again at Damonta, where he will ask you to rescue him from robots that have him trapped. If you do, he'll tell you about hearing rumours of a treasure in one of the airliners located in the plane graveyard.

Red will ask you to accompany you and will promise to hand over a share of the treasure, running off on his own to find it if you refuse. You can still learn about the treasure in case he is killed instead of being rescued.

Retrieved from "https://wasteland.fandom.com/wiki/Red_Baychowski?oldid=21259"
Community content is available under CC-BY-SA unless otherwise noted.