Robot Killer is a robot enemy in Wasteland 2. 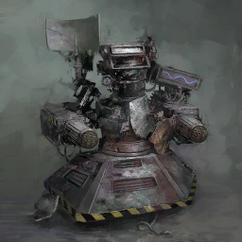 The Robot Killers are robots produced in Base Cochise by the facility's AI to wipe out humans. The robot is mounted with a fire plasma weapon. They disappeared from Arizona after the destruction of Base Cochise, but reappeared around 2102.

Robot Killers are encountered at the Radio Tower after you learn from Red about Rick Baychowski.

Retrieved from "https://wasteland.fandom.com/wiki/Robot_Killer?oldid=20711"
Community content is available under CC-BY-SA unless otherwise noted.