Sio 7 is a pre-war missile silo containing the Titan II inter-continental ballistic missile armed with a nuclear warhead. The facility was built near Tucson, Arizona in 1960s after the Davis-Monthan Air Force Base was selected as the site of an ICBM wing.

A member of the M. A. D. Monks named Brother Wright was dispatched to the facility by Father Enola to retrieve the Titan missile, but lost his faith after finding out the Titan missile in the Temple of Titan the monks worshiped as a god, didn't have any nuclear warhead.

Wright decided to dismantle the one in Silo 7 so it didn't fall in the wrong hands or kill any people, but couldn't figure out a way. He fortified the place and managed to repel all the monks sent by Enola to take him down and retrieve the missile.

A Sierra Madre Airliner carrying gold bars also crashed near the silo when the bombs fell during the brief nuclear war in 2077 and became a legend among prospectors, but its exact location remained undiscovered. 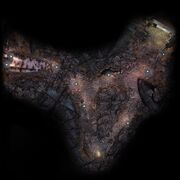 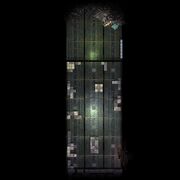 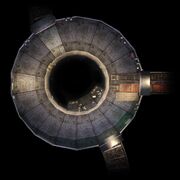 The path to the missile silo is guarded by two 20mm turrets, however they won't be much trouble. The path ahead has a host of mines, but they can be easily discovered and disarmed with a high enough skill in Perception Demolitions.

Brother Wright won't be hostile and would let you do whatever you want with the Titan missile.

To the west of the the silo is the entrance to the Sierra Madre Airliner which Red Baychowski is after. You'll need high enough Perception to find it. Inside the airplane, you'll need to retrieve the screwdriver to open the compartment containing the gold.

Retrieved from "https://wasteland.fandom.com/wiki/Silo_7?oldid=22201"
Community content is available under CC-BY-SA unless otherwise noted.