Slicer Dicer is an enemy robot in Wasteland 2. 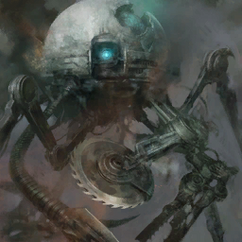 A powerful robot created by the Base Cochise AI, the slicer dicer is so named due to its use of cutting weapons like saws. The robot was designed for combat against the humans.

Retrieved from "https://wasteland.fandom.com/wiki/Slicer_Dicer?oldid=20721"
Community content is available under CC-BY-SA unless otherwise noted.