"Snake" Vargas was born in a predominantly Hispanic small town south of the Ranger Center. His mother was the only doctor in the town and he learned his medical skills from her.

While he was young, a gang of raiders attacked their town and slaughtered many of the townsfolk. While he and many others were able to escape, his mother died of a gunshot wound which he was unaware of. Him, Joe-Thomas, Pops, and Suzy tracked the raiders who attacked their town and destroyed their gang. They all went their separate ways and Snake joined the Desert Rangers to have the chance to kill as many raiders as possible.

Snake was a fun-loving ranger who often got himself involved in many bar-brawls and fights. He earned his nickname, Snake, for being a magnet for snakebites - and surviving them every time. During his training, he met Angela Deth, Hell Razor and Thrasher. While they were an odd bunch, Sergeant Dalton recognized that their skills gelled well together and forced them to stay part of a single squad.

While on a routine patrol through the wastes in 2087, they rescued Ace from Quartz and were asked by him to come to Las Vegas. There, they met his boss Faran Brygo and were informed about robots attacking humans and settlements in the wastes.

The Rangers discovered that they were being produced by Base Cochise AI. In order to end the robot threat, they destroyed the base and saved the wastes. Many Rangers were however were killed when their base called The Prison was attacked by mutants from Darwin, which he found out after returning.

After the destruction of the base, Vargas continued his career as a ranger and quickly climbed up the ranks. He suggested moving the Ranger base to the Guardian Citadel, which Surgrue declined. He eventually became the Ranger General after Surgrue retired and as one of his first acts, shifted the base of the Rangers to Guardian Citadel, renaming it as the Ranger Citadel.

At the Citadel, Vargas rebuilt the strength and numbers of the Desert Rangers. This however resulted in shrinkage of their territory. He abandoned his nickname Snake sometime around the destruction of the Base Cochise and around the time of the last bar-brawl he participated around 2092. He started becoming increasingly withdrawn, spending more time in his office than in the field operations.

The death of Ace in 2102, caused him to re-evaluate his priorities and he replaced Wade Woodson as the dispatcher. He walks using a cane due to his lame leg and because of that doesn't fight in the field anymore.

Snake Vargas is one the 4 starting party members when you begin a game of Wasteland. He comes equipped with a VP91Z 9mm pistol, 8 9mm clips, Rope, Canteen, Crowbar, Knife, Hand Mirror, and Match. 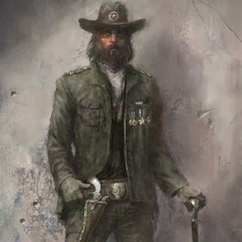 General "Snake" Vargas is the leader of the Desert Rangers at the Ranger Citadel, and the first person you talk to in Wasteland 2.

Retrieved from "https://wasteland.fandom.com/wiki/Snake_Vargas?oldid=22005"
Community content is available under CC-BY-SA unless otherwise noted.