The Temple of Titan is a location in Wasteland 2 and the base of the M. A. D. Monks.

The Temple of Titan is a former silo containing the Titan II inter-continental ballistic missile. The area is controlled by the M. A. D. Monks, who threaten to unleash the ICBM if anyone breaks the peace in their territory.

The silo was found by Brother Ramirez, a member of the Servants of the Mushroom Cloud. He believed it to be a temple built to Titan, whom he came to see as a god. Believing that Titan had sent him to recruit other followers his faith, Ramirez started preaching among his group.

He gained some followers, but many of the Servants of the Mushroom Cloud turned against him, leading to a civil war. He then left the group along with his followers and brought them to the silo, believing that Titan ordered him to do so.

Here, he and his followers who came to be known as the Mad Monks, established their base and made others follow their rules since most people believed that it was armed with a nuclear warhead.

Anyone wanting to pass through the area must pay a tribute. Only the monks are allowed in the underground facility except the hospital, where all those who paid their tribute can get treatment for free.

The area is connected to the Canyon of Titan, an important pass used by traders to traveling between Damonta and parts of Arizona west of it. The monks maintain control over both and they serve as neutral grounds for anyone with tribute. 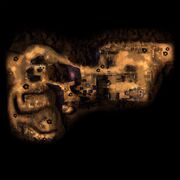 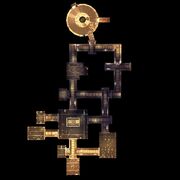 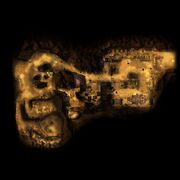 Retrieved from "https://wasteland.fandom.com/wiki/Temple_of_Titan?oldid=21645"
Community content is available under CC-BY-SA unless otherwise noted.