Gilbert "Thrasher" Sagarra is one of the four pre-made chracters in Wasteland and a character in Wasteland 2.

Thrasher's real name was Gilbert Sagarra and he was a tall and a powerful man with a height of 6'6. He was part of the team along with Snake Vargas, Angela Deth and Hell Razor that invaded Base Cochise but was severely wounded in the fight and lost his leg, leaving him unable to participate in field operations.

Thrasher is one the 4 starting party members when you begin a game of Wasteland. He comes equipped with an M1911A1 .45 pistol, 8 .45 clips, Rope, Canteen, Crowbar, Knife, Hand Mirror, and Match. 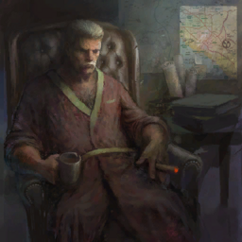 Ranger Citadel, near the museum

After being injured in the fight to take down Base Cochise, Thrasher became a cartographer for the Desert Rangers. He is still able to walk since a doctor named Kyle provided him with an advanced prosthetic leg, powered by a fuel cell implanted in his chest.

He is typically found in the Ranger Citadel, near the museum, where he takes care of the many maps in the Ranger archives (and complains whenever the always warring Rail Nomads force him to update them).

He doesn't warm up quickly to new recruits, mostly due to them tending to waste his time and always asking for a tour of the Citadel's musueum. He doesn't think highly of General Vargas' cautious approach, seeing it as the cause of the shrinking territory of the Desert Rangers.

He gets along well with Flintlock Eggleston despite his incessant chattering, mainly due to him keeping any recruits from bothering him.

Retrieved from "https://wasteland.fandom.com/wiki/Thrasher?oldid=21610"
Community content is available under CC-BY-SA unless otherwise noted.