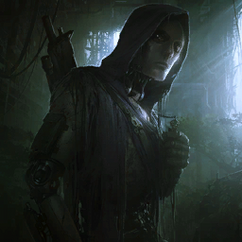 Tinker is a character in Wasteland 2.

Tinker is a synth with the programming of a female and a plant of the Children Of The Citadel.

She was behind the robot attack on Damonta in 2102. Originally pretending to make the life better of others, she used it for experimentation on them. One such experiment was conducted on Lexcanium.

After repairing and activating the robots lying in the town's airplane graveyard, she ordered them to attack the townfolk. Meanwhile, she also kidnapped Binh Nguyen and experimented on her.

Tinker will be found replacing Binh's heart with a chestpiece. She will order other robots to attack the Desert Rangers once she spots them. The fight can be won fairly easy though in case you have Vax or an energy weapon as she will stop it once she takes enough damage.

The server in the hangar must be hacked for you to disable the terminal that controls Tinker's communications system. Trying to free Binh without disabling it will result in her killing the girl. If you talk to Tinker three times, she will kill the girl.

Trying to free Binh or disabling the robots through another terminal will start another fight. She will stop the second fight after taking enough damage and promise to give you information. This is just a ruse as she will just destroy yourself if you try to talk to her.

She can drop Tinker's Finger, Meson Cannon, Tinker's Heart, Tinker's Right Arm and some energy cells upon being destroyed.

Retrieved from "https://wasteland.fandom.com/wiki/Tinker?oldid=21634"
Community content is available under CC-BY-SA unless otherwise noted.