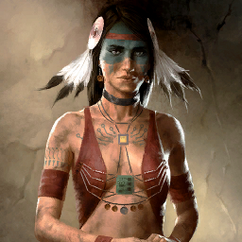 Vulture's Cry is a character and recruitable NPC in Wasteland 2.

Vulture's Cry is a scout for the Native American Hare tribe that lives beyond the Arizona waste's southern border where she had a family. When radioactive clouds of dust that blocked the way to Arizona were cleared by winds, she and two of her friends decided to travel to Arizona to trade.

She had brought along seeds to Arizona that could grow in scarcity of water and which she wanted to trade. However except her, her group was killed off in their second week in the Arizona wastes by raiders. She attempted to head back to her tribe but the radioactive dust clouds had already moved back into place by the time she arrived at the passage, and she was barred from returning to her tribe.

She waited a while but the clouds never left and she didn't know if she'll ever be able to go back. Thus she decided to explore new lands as much as she could and learn all she could possibly learn, she set out once again on her mission. She, unfortunately, came to the rather closed-minded community that lived in Highpool.

After the Wrecking Crew attacked Highpool, the residents arrested her from the shop of Harold who had betrayed her, wrongly believing her to be a spy for the group due to her strange ways and showing up just a day before the attack. Harold also took her equipment.

When you first talk to Vulture's Cry, she'll play the "noble savage" stereotype and pretend she's not fluent in English. She'll to help you in return for helping her, but first she'll ask you to get rid of the juvies pestering her though you can simply free her outright.

Talk to her after getting rid of the juvies and she'll offer to join your squad. If you keep talking to her about what's she doing there and then talk about the juvies, her act will slip and she'll admit she was just does it to gain a favorable impression among non-Indian peoples.

Regardless of whether you allow her to join your party or not, she'll still ask you to free her. If you agreed to let her join you, she'll be made a deputy of the Desert Rangers. At The Prison, she will refer to Werewolf Wally after you talk to Red, though her written dialogue will be different.

Vulture's Cry is equipped with nothing when you recruit her. However, her equipment can be recovered from the Highpool merchant Harold with a level 2 Hard Ass skill, which can easily be filled by bringing Angela Deth along. The recovered equipment consists of a G43-W sniper rifle, 20 .30-06 Ammo rounds, an Unusual Bow, and her Pet Rock. If you do not meet the Hard Ass 2 requirement when it pops up, you won't be able to choose the option ever again.

She comes with CLASSIC stats of 5332384 and skills Animal Whisperer 4, Sniper Rifles 3, Outdoorsman 3, Perception 3. Her decent coordination of 5 and rather low 3 awareness makes her rather less fit for main sniper rifle DPS member. However, her 3 outdoorsman at such early in the game and high intelligence of 8 makes her a great specialist in the team. However, the perception skill is rather harder to utilize as it is usually best learned by the front line melee rangers.

Although compared to Rose, her skills are a bit lacking in usefulness and she has 2 less intelligence, meaning 1 less skill point per level, her sniper rifle specialization is easier to utilize and unlike Rose, she can still accompany Echo team on the final battle. Also, Highpool is a lot easier to go through and more rewarding than Ag Center, and given both NPCs' low health, the sniper rifle skill is much more useful, especially in the late-game.

Retrieved from "https://wasteland.fandom.com/wiki/Vulture%27s_Cry?oldid=21579"
Community content is available under CC-BY-SA unless otherwise noted.