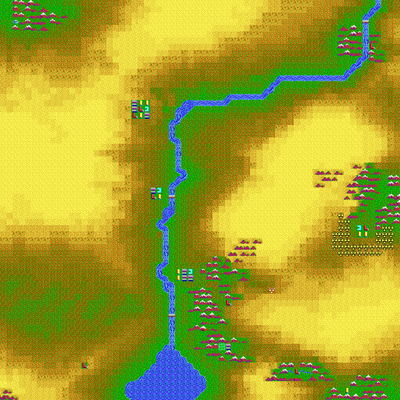 North and/or West of the central river locations include:

South and/or East of the central river locations include: 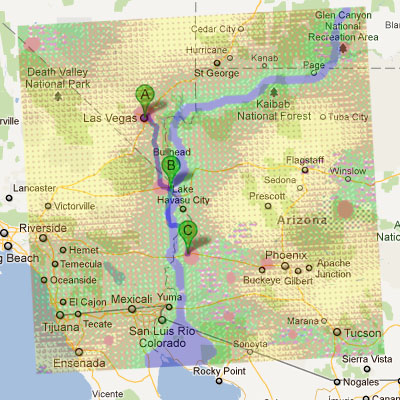 Using a composite of the main map and a Google map with scaled alignment of Las Vegas, Needles, and Quartz.

Las Vegas: West of the bend in the Colorado River and the Highway 93 bridge crossing.

Needles: West of the river and the Interstate 40 bridge.

Quartz: Quartzsite, East of the river and the Interstate 10 bridge.

Guardian Citadel: South of I-10 (N of I-8) between Quartzsite and Phoenix in the mountains.

Agricultural Center: South of I-8, perhaps "Ajo" on Highway 85.

Highpool: South of Phoenix, West of Tucson, there is a town named "Sells", also "Pisinemo Trading Post" to the North of Sells in the hills.

Ranger Center: South of Tucson east of I-19, closest prison is:

Darwin Village: North-East of Phoenix, South of Winslow. Mountains are in a odd place to pick anything for certain.

Sleeper Base: The bridge North could be I-70, and the base would be South between "Halls Crossing" and "White Mesa"

Base Cochise: North-East of Death Valley, "Lida Junction Airstrip" at the intersection of HWY 95 & 266.

Retrieved from "https://wasteland.fandom.com/wiki/Wasteland_world?oldid=15279"
Community content is available under CC-BY-SA unless otherwise noted.