Werewolf Wally is a character in Wasteland 2. 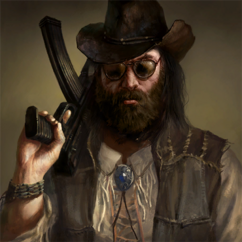 Wally is the resident radio jockey of Damonta and his radio broadcasts can be heard far and wide in eastern Arizona, even by the tribe of Vulture's Cry, thanks to Damonta's radio tower. He runs the radio station called KPOW and often advertises the town on his broadcasts, in addition to playing music.

He's heard of the Desert Rangers due to broadcasts sent by their dispatcher Sergeant Wade Woodson, picking them up due to the radio tower of the town. In 2102, he was trapped in his radio station by two robots while the town was attacked by the machines which had been dormant since 2087.

Wally will be first heard in radio broadcasts while traveling through the Canyon of Titan.

You can rescue Wally by destroying the robots outside his station and can convince him to let you in by informing that you're Desert Rangers. When you first meet him, he will describe himself in a self-narrative style.

If you ask him from the key to the radio tower's gate, he'll ask you to take out the robot threat in order to save the town. You can make him give the key without completing the quest, if you have a level 5 rank in Hard Ass or Smart Ass.

You can also kill Wally to receive the Damonta Tower Access Key.

Retrieved from "https://wasteland.fandom.com/wiki/Werewolf_Wally?oldid=21260"
Community content is available under CC-BY-SA unless otherwise noted.